We live in an age when it’s more important to belong than to believe. People are looking for community and for connection. Even in the Christian community, truth and beliefs and doctrines are minimized. But God is calling us to worship in spirit and truth (John 4:24). In other words, it is not belonging or believing; it is belonging and believing. God wants us to have community that is grounded in truth.

Belonging and believing in an Adventist community necessitates that questions of Adventist identity must be answered. We must know for ourselves whether the central tenets of our belief system are indeed on solid biblical footing. Ellen White states that the 2,300-day prophecy is “the central pillar” of the Adventist faith. By implication, if we are wrong on the “central pillar,” the whole structure crumbles. How solid is the evidence for our interpretation of Daniel 8:14? This is an identity question that we cannot afford to entrust to others; we must examine the evidence for ourselves.

Chapter 9 begins with Daniel’s reference to the seventy-year captivity and his prayer for the restoration of his people to Jerusalem, as God had promised through Jeremiah. Daniel is worried that the timetable for the restoration of his people, the city of Jerusalem, and the temple’s rebuilding will be extended. Gabriel comes and says that he has come to help Daniel to “understand the vision” (Dan. 9:23). The vision of the 2,300 days is not understood, and the angel Gabriel proceeds to give the seventy-week prophecy. In other words, the key to understanding the 2,300-day prophecy is to link it with the seventy-week prophecy.

Below is a diagram of 2,300-day and seventy-week prophecies, applying the day/year principle: 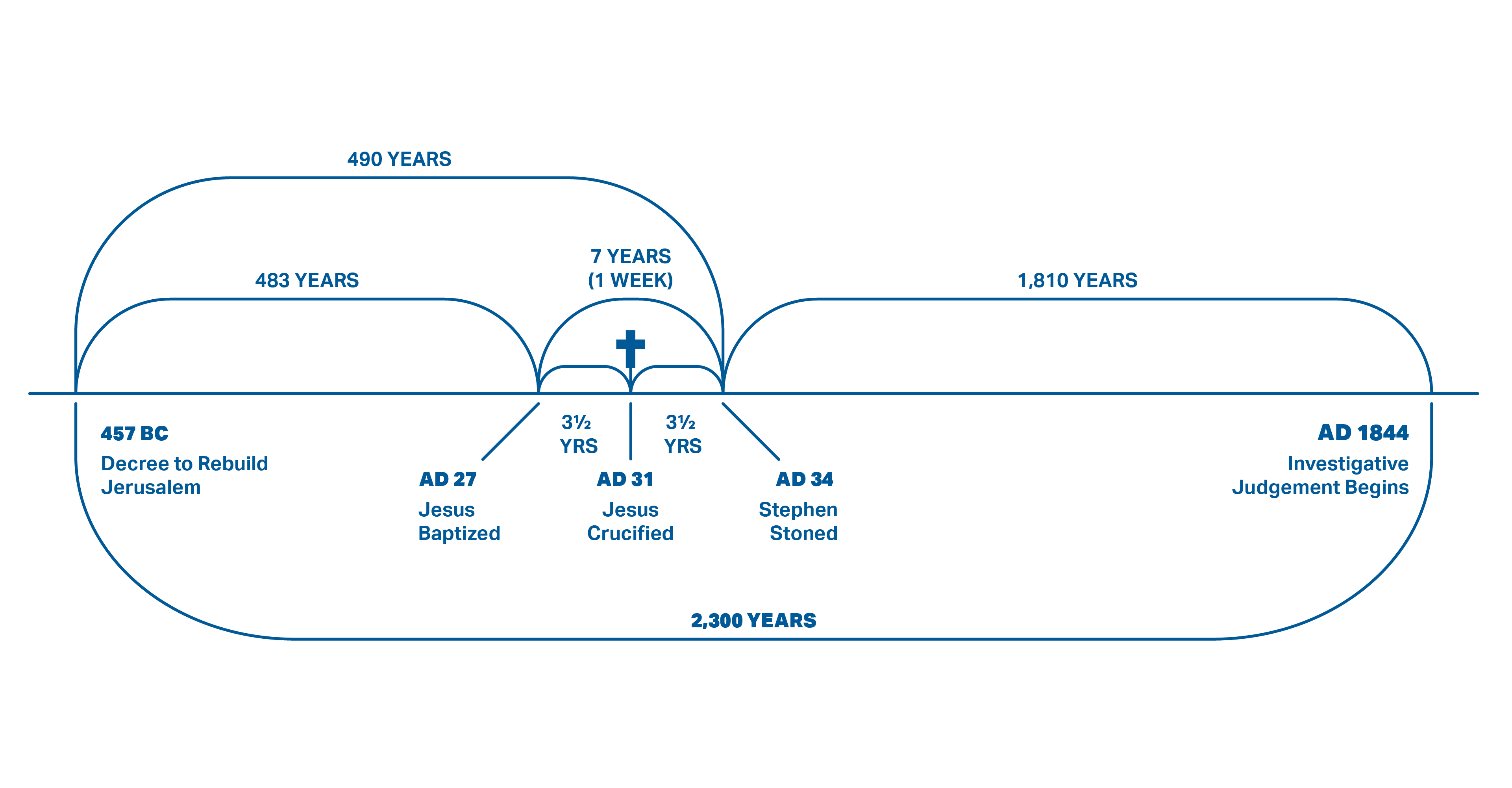 The prophetic date of 1844 and the Adventist belief in the investigative judgment are grounded in the seventy-week prophecy. The seventy-week prophecy proves the authenticity of Jesus as the Messiah. He was baptized exactly on time. He died exactly in the year that the Bible predicted. It’s hard to deny the veracity of seventy weeks and its fulfillment in Jesus Christ. When the seventy weeks are linked with the 2,300 days, the implications are clear. If 1844 is wrong, then the seventy weeks are also wrong, and Jesus is not the Messiah. In other words, if you are a Christian, then prophetically speaking, you must believe in the investigative judgment that began in 1844. If you believe in Jesus as the Messiah, then being a Seventh-day Adventist makes perfect sense.

How solid is the link between the 2,300 days in Daniel 8 and the seventy weeks in Daniel 9?

When Daniel 8 and 9 are read together from chapter to chapter in sequence, it becomes clear that they are linked. (Remember, there were no chapter divisions in the original manuscript; the divisions were added later for our convenience.) Here are evidences that the 2,300-day prophecy of Daniel 8 and the seventy-week prophecy of Daniel 9 are linked:

What about the gap theory?

Some Christians have espoused the belief that the last week in the seventy-week prophecy is to be detached and thrown off into the future. See the diagram below: 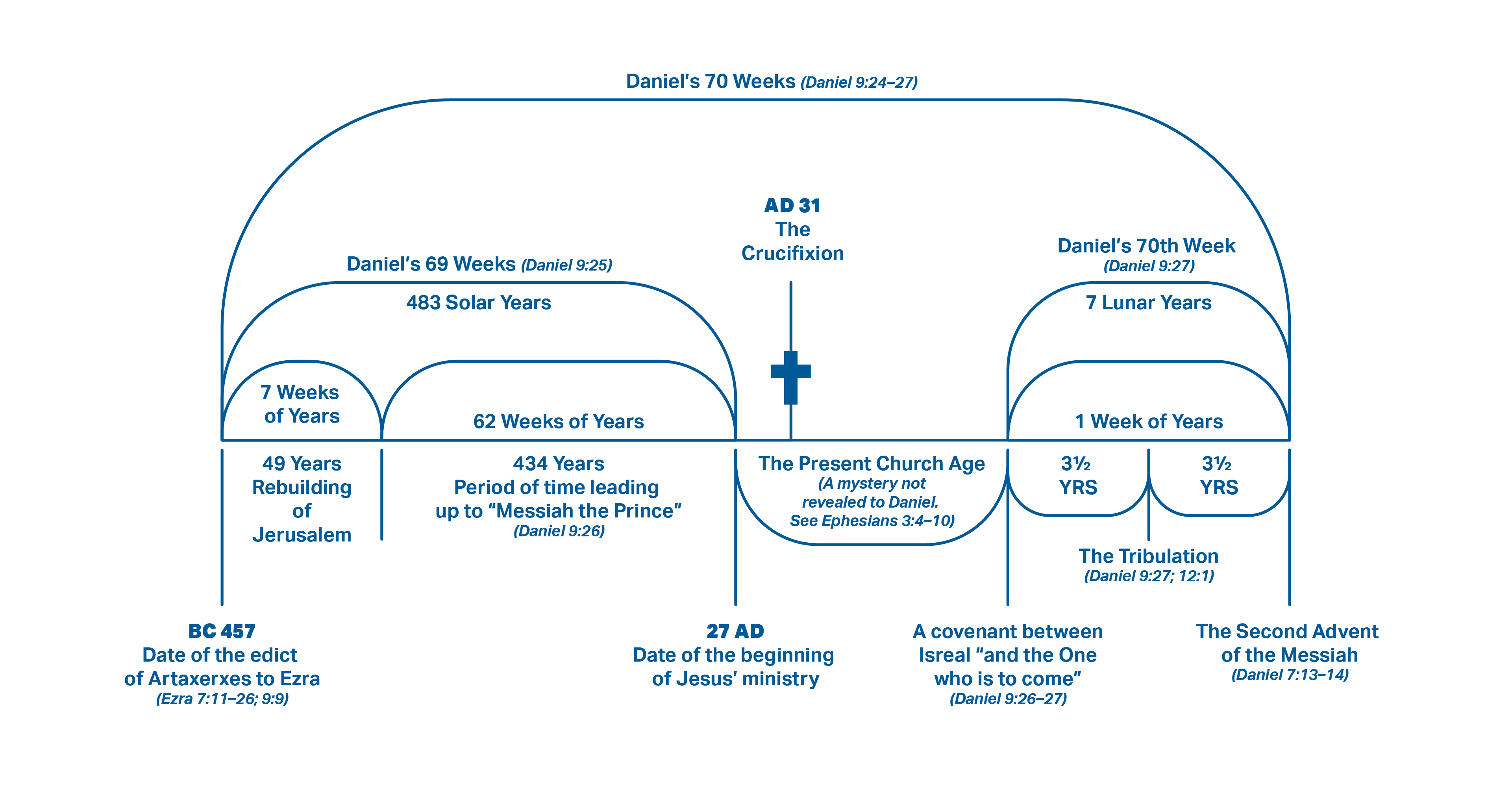 [graphic will need to be created]

There are a number of issues with this position. First, there is no indication from the seventy-week prophecy in Daniel 9 of any discontinuation or separation of the last week from the other 69 weeks. Furthermore, there is no mention of the anti-Christ in the seventy-week prophecy; on the contrary, the seventieth week is a reference to “Messiah” (v. 26), who “shall bring an end to sacrifice and offering” (v. 27). Jesus did this when He died on the cross and the temple veil was torn from top to bottom (Matt. 27:51). This indicated that earthly sacrifices were no longer necessary because the real Lamb of God had been slain.

Seventy-week prophecy diagram based on Daniel 9:24–27 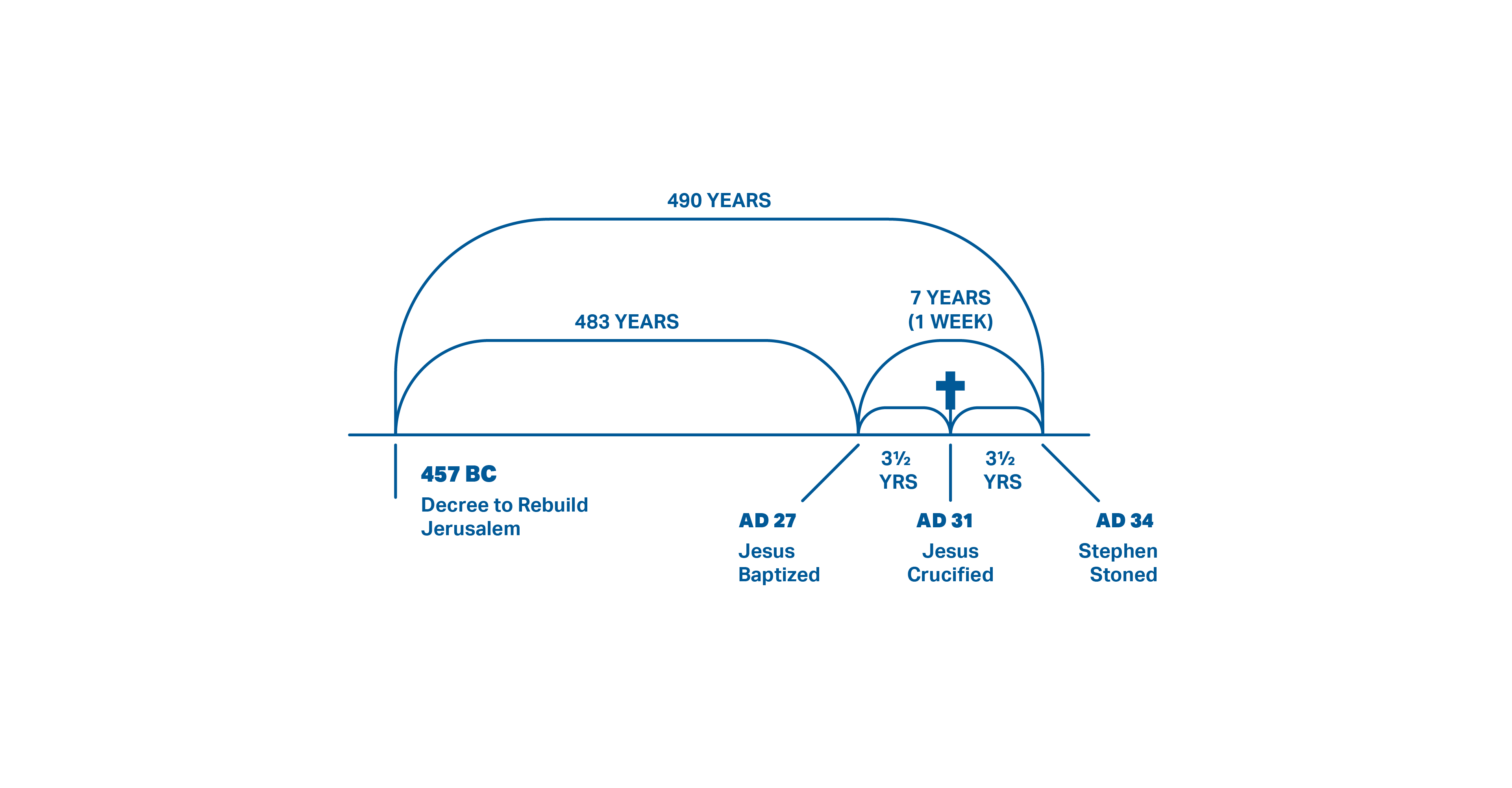 How do the following verses relate to the primary passage?

What other verses/promises come to mind in connection with Daniel 9:20–27?

Adventist identity is anchored in Jesus as Messiah. The whole notion of 1844 seems bizarre to other Christian communities. Where in the world did we come up with that date? Yet, when we see clearly that 1844 comes from being faithful to the text and anchoring it in the Messianic prophecy of Jesus Christ, we come to the realization that 1844 is not weird but that it is Christ-centered! According to the book of Daniel, the Adventist belief in 1844 is anchored in the belief that Jesus is the Messiah; and the veracity of the seventy-week prophecy gives veracity to the date of 1844.

The judgment message is anchored in Jesus as Messiah and the gospel. The whole notion of the judgment seems antithetical to the gospel and the good news of salvation bought at Calvary. However, Daniel 8 and 9 do not disassociate the two, but rather the chapters link them together. The message of judgment and the message of the cross are joined together prophetically; they should not be dissociated from each other theologically.

The linking of the seventy-week prophecy and the 2,300-day prophecy links Jesus as the Lamb and Jesus as High Priest. These two time prophecies reveal Jesus in the courtyard of the sanctuary and, by implication, Jesus as our High Priest in the Holy Place during the span from 31 AD to 1844 AD; and Jesus as our High Priest in the Most Holy Place from 1844 to the present day. The linking of the seventy-week and 2,300-day prophecies further authenticates the sanctuary as the hermeneutical key to understanding the plan of salvation.

“The scripture which above all others had been both the foundation and the central pillar of the advent faith was the declaration: ‘Unto two thousand and three hundred days; then shall the sanctuary be cleansed.’ Daniel 8:14. These had been familiar words to all believers in the Lord’s soon coming. By the lips of thousands was this prophecy repeated as the watchword of their faith. All felt that upon the events therein foretold depended their brightest expectations and most cherished hopes. These prophetic days had been shown to terminate in the autumn of 1844. In common with the rest of the Christian world, Adventists then held that the earth, or some portion of it, was the sanctuary. They understood that the cleansing of the sanctuary was the purification of the earth by the fires of the last great day, and that this would take place at the second advent. Hence the conclusion that Christ would return to the earth in 1844.

“But the appointed time had passed, and the Lord had not appeared. The believers knew that God’s word could not fail; their interpretation of the prophecy must be at fault; but where was the mistake? Many rashly cut the knot of difficulty by denying that the 2300 days ended in 1844. No reason could be given for this except that Christ had not come at the time they expected Him. They argued that if the prophetic days had ended in 1844, Christ would then have returned to cleanse the sanctuary by the purification of the earth by fire; and that since He had not come, the days could not have ended.

“To accept this conclusion was to renounce the former reckoning of the prophetic periods. The 2300 days had been found to begin when the commandment of Artaxerxes for the restoration and building of Jerusalem went into effect, in the autumn of 457 B.C. Taking this as the starting point, there was perfect harmony in the application of all the events foretold in the explanation of that period in Daniel 9:25–27. Sixty-nine weeks, the first 483 of the 2300 years, were to reach to the Messiah, the Anointed One; and Christ’s baptism and anointing by the Holy Spirit, A.D. 27, exactly fulfilled the specification. In the midst of the seventieth week, Messiah was to be cut off. Three and a half years after His baptism, Christ was crucified, in the spring of A.D. 31. The seventy weeks, or 490 years, were to pertain especially to the Jews. At the expiration of this period the nation sealed its rejection of Christ by the persecution of His disciples, and the apostles turned to the Gentiles, A.D. 34. The first 490 years of the 2300 having then ended, 1810 years would remain. From A.D. 34, 1810 years extend to 1844. ‘Then,’ said the angel, ‘shall the sanctuary be cleansed.’ All the preceding specifications of the prophecy had been unquestionably fulfilled at the time appointed.”

What are reasons that individuals are part of a denomination?

How important is the role of doctrines in choosing a denomination?

Is it more important to belong or to believe?

What evidence can you give for Jesus being the Messiah?

How does the 2,300-day prophecy build your faith in the Adventist movement?

Why is it important to have a solid biblical position for our core doctrines?

Why do you think the sanctuary is “the central pillar” (The Great Controversy, 409) of the Adventist faith?

What are the implications of living in a time of judgment since 1844?

The Secret of Prophetic Understanding

The Key to Prophetic Understanding

A Church in Crisis