Romans is organized in a number of large-scale thematic units: introduction, 1:1–16; universal condemnation from birth, 1:17–3:20; basis for justification, 3:2–5:21; sanctification, 6:1–8:39; and so forth. Romans 6 also forms its own thematic unit: 6:1–10 focuses on baptism representing conversion and spiritual participation in the life and death of Jesus leading to a death to sin and a new “walk in newness of life” (v. 4, NKJV); 6:15–23 describes the life before and after baptism as a transition from being “slaves of sin” to “having been set free from sin, [being] slaves of righteousness” (vv. 17, 18, NKJV).

In between Romans 6:1–10 and 15–23 Paul summarizes this transition by labeling the former life as “under law” and the new life in Christ as “under grace.” 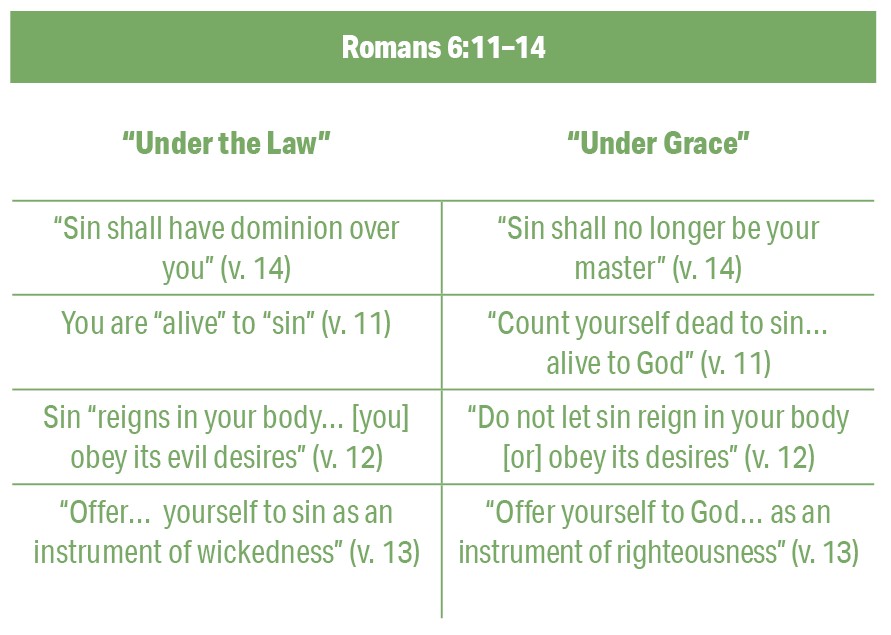 In verse 14 Paul clearly states that sin has dominion over you unless and until you come “under grace,” which, in the context of this chapter, happens at conversion, and in the New Testament era was symbolized by baptism. Romans is in sync with the rest of Scripture, which affirms that the transition from being destined to eternal death and eternal life is marked by conversion, no matter when or where a person was born in history. There are not different plans of salvation or different gospels in the Old Testament and New Testament. In verse 14 Paul labels life before conversion as a life “under law” and life after conversion as life “under grace.” Perhaps in this passage he means by “under law” to mean under condemnation for breaking the law, or possibly for relating to God’s law solely in a legalistic way. We do not know for certain why he gave the pre-converted life this title; we only know that in Romans 6:14 he did.

Verses 11–13 follow the same pattern in this template. In each case the contrasts he presents are stark and unambiguous: life before the transition, that is, the “under law” life, the old covenant life, shares an affinity with sin—you are “alive” to it, it has “dominion over you” and “reign[s] in your mortal body”; you “obey…its lusts”, and you “present . . . yourselves” to aide in its destructive work in the lives of others. In contrast, the life after the transition to an “under grace” life, the new covenant life, is “dead . . . to sin [and] alive to God,” does not let “sin reign in [one’s] mortal body [or] obey…its lusts” or “have dominion over you,” and “present[s oneself] to God . . . as [an] instrument of righteousness” to participate in Jesus’ mission to seek and to save the lost.

Most modern biblical commentators use Romans 6:14 to describe the historical old (Sinai) covenant as a covenant that kept people “under law” until Jesus came in history and enacted the historical new covenant which set New Testament believers free from living “under law” so that they might live “under grace.” So if you are sharing the Sabbath or the biblical health message with someone and they respond, “I am not under the law but under grace,” this is where they are coming from—they likely heard it presented that way in church.