The chart below lists contrasting characterizations of the old and new covenants in 2 Corinthians 3. Take some time to dwell on each horizontal contrast individually, and then on each of the two vertical columns. Note the contrasts carefully for the implications of interpreting these covenants historically or experientially. What conclusion do you arrive at based simply on these characterizations without any additional commentary? Does the text itself, given what you already know about the old and new covenants, help you determine with reasonable certainty whether this list is describing the historical old and new covenants or the experiential responses to the gospel presented in the historical covenants? 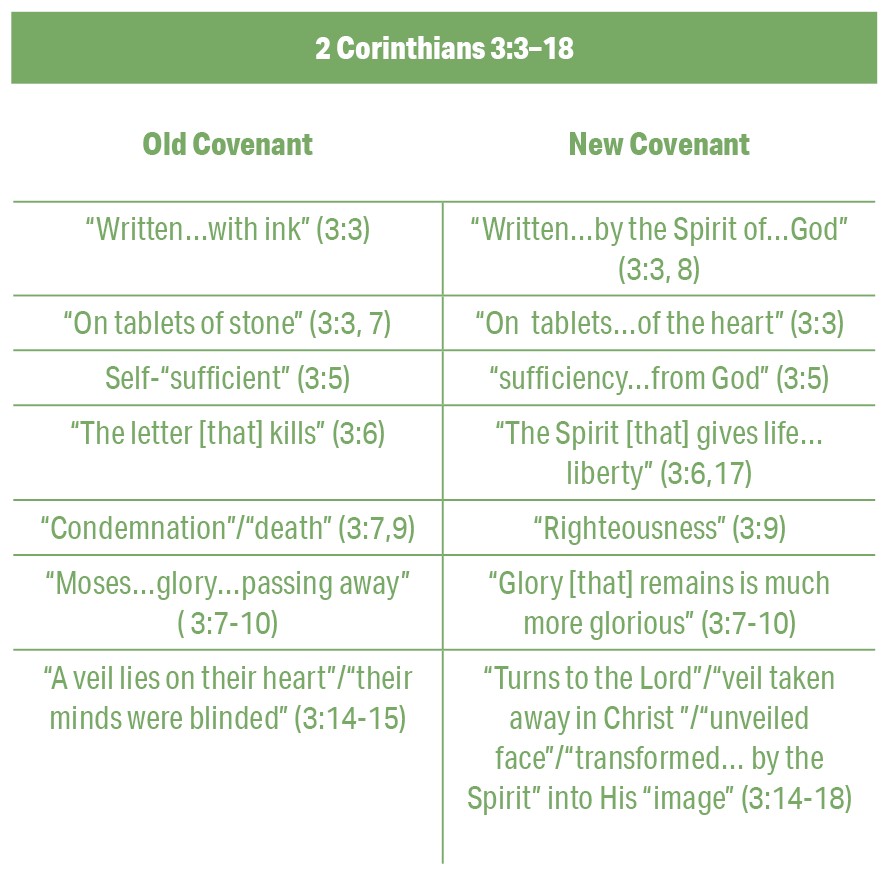 Most commentaries on the covenants ascribe all the left-column characterizations to the Sinai covenant and all the right-column ones to the historical new covenant. But think about the implications of that view. It means that God intended that His Sinai covenant and law be externally responded to and that His law could not be written on “the heart” until Jesus came in history (2 Cor. 3:3). And yet it was in the Sinai covenant that God first announced His intention to write His law in their hearts (Deut. 6:6; 30:6, 11–14), and the Old Testament often testifies to His fulfillment of that promise for Old Testament believers (Ps. 37:30, 31; 40:8; Isa. 51:7; see lesson 3). In addition, it would mean that God designed the Sinai covenant to make people self-“sufficient,” to be a “letter that kills” (v. 6, NKJV), a covenant of “condemnation” and “death,” a covenant to “veil” the “heart” and blind the “minds” (vv. 9, 10, 14) of His covenant people to the perception and reception of the gospel! That is contrary to everything the Old Testament taught about the Sinai covenant. Furthermore, it would mean that none of the right-column characterizations of the new covenant could be experienced by anyone, including those in the Hebrews 11 hall of faith, until Jesus came in history!

But while these characterizations do not generally match the historical old and new covenants, they do correspond to people’s responses to the gospel presented in those covenants. An old-covenant response to the gospel results from their minds being blinded to the gospel and from failing to “turn to the Lord,” which prevents God’s law from being written in their hearts, leading to condemnation and death.

This is not to say there are no allusions at all to the historical covenants in the passage. Without doubt, the historical new covenant was “much more glorious” (v. 11, NKJV) than the Sinai covenant in that Jesus had come in the middle and had made the one and only atoning sacrifice by which sinners in every historical era could be forgiven (Heb. 9:15). Yet an experiential application can be made even with that contrast. In Jesus’ parable of the sower, the seed (gospel) fell on different soils (conditions of the heart) (Matt. 13:3–9, 18–23). A “glory” always attends the sharing of the gospel whenever and to whomever it is shared. But that “glory [is] passing away” (2 Cor. 3:7) when people reject it outright or accept it but later fall away. When it is lastingly accepted and bears fruit, it is a “glory that . . . remains [and thus] is much more glorious” (vv. 10, 11, NKJV). Hence, experiential responses to the gospel can be characterized as a “passing glory” or one “much more glorious” that “remains.”