Have you heard of Euclid’s first “common notion” in Book 1 of his fourth-century Elements: “Things which are equal to the same thing are also equal to each other”? We saw last week that God defined the new covenant unequivocally, in its DNA, by its four gospel promises (Jer. 31:33, 34; Heb. 8:10–12). Where did these defining promises come from? Would you believe they came from Sinai? Consider the following evidence:

Promise 1. “I will write My law in their hearts” (sanctification). Called the Shema (the first Hebrew word in 6:4, shamah, “hear”), Deuteronomy 6:4–9 is the devout Jew’s most sacred passage in the law—the first words spoken over a newborn child; the last spoken before death; the first spoken every morning and the last spoken every night; ever present in the consciousness and conversation of the faithful throughout the day: “When you sit at home and when you walk along the road, when you lie down and when you get up.” The Shema follows Moses’ recitation of the Ten Commandments (5:2–22) and begins: “Hear, O Israel: The LORD our God, the LORD is one! You shall love the LORD your God with all your heart, with all your soul, and with all your strength. And these words which I command you today shall be in your heart” (6:4–6, NKJV, emphasis supplied).

Moses was reassuring them that God Himself would inscribe His words on their hearts if they would trust Him to do so. Moses later assured them: “This commandment which I command you today . . . is very near you, in your mouth and in your heart, that you may do it” (30:11–14, emphasis supplied; see also Ps. 37:30, 31; Isa. 51:7). God embedded this promise in His Sinai covenant long before Jeremiah or Hebrews were written.

Promise 2. “I will be their God, and they shall be My people” (reconciliation). God made this promise to Israel also in the Sinai covenant. Sandwiched between His recital of the covenant blessings for those faithful to the covenant and curses for the persistently, unrepentantly disobedient, He promised: “ ‘I will walk among you and be your God, and you shall be My people’ ” (Lev. 26:12, NKJV, emphasis supplied).

Promise 3. “All will know Me from the least to the greatest” (revelation/mission). This new-covenant promise anticipated the day when everyone will know God in the earth made new. Meanwhile, Israel and the church were both called to mission, assisting God in making Him known to the outside world. God called Israel to be a nation of priests to the nations around them, teaching those nations the gospel as it had been revealed in the covenants from Genesis 3:15 to Sinai (Exod. 19:5, 6/Exod. 28:4; Ps. 67:1, 2; and others).

Promise 4. “Their sins and their lawless deeds I will remember no more” (justification). The first scriptural revelation that God will forgive sins occurs in—you guessed it—the Sinai covenant! Immediately after He gave Moses the Ten Commandments the second time (Exod. 34:1–4), God revealed Himself as “forgiving iniquity and transgression and sin” (v. 7; the Hebrew text includes the most egregious, rebellious sin for which there was no sacrifice available (Exod. 34:6, 7)!).

The new covenant and the Sinai covenant shared unmistakably the same defining promises. Meaning? First, the historical old and new covenants share the same spiritual DNA; in this crucial sense they were both equal to the same thing and thus equal to each other. Both covenants were sharers in and bearers of the one true, everlasting gospel. (Note this week’s graph.) 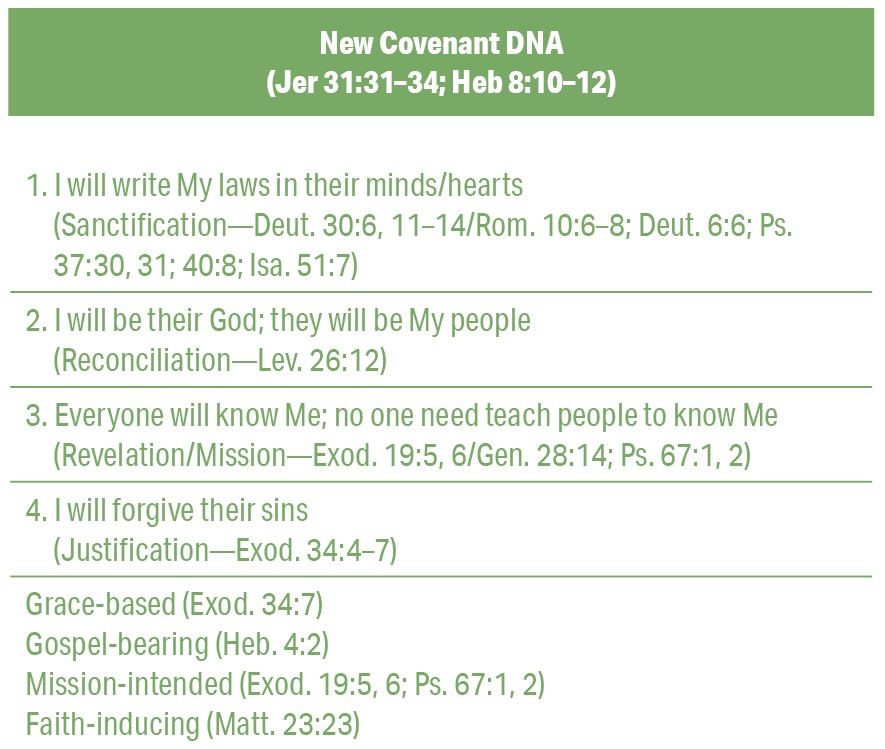